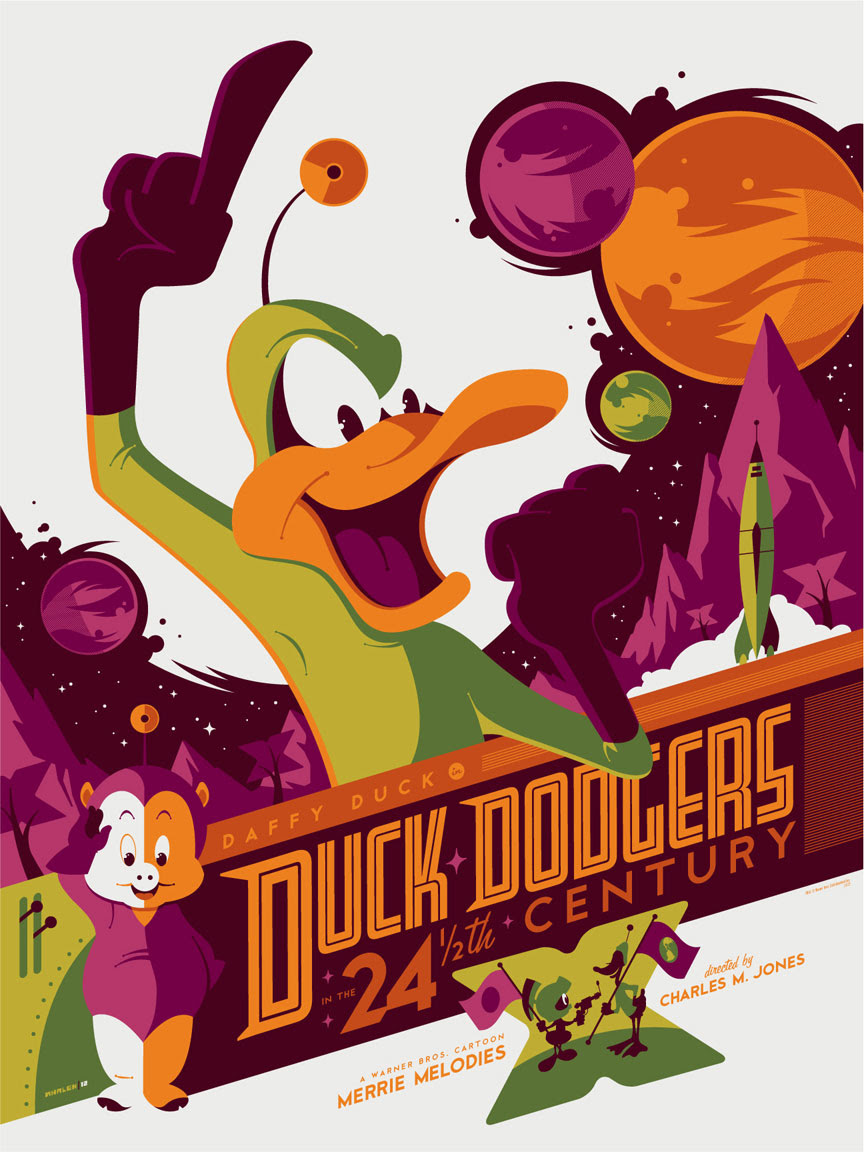 For a little over a year now, Tom Whalen has been Mondo’s go-to artist for contemporary movie posters of classic cartoons. Mondo, of course, is the Austin-based gig-style movie-poster publisher whose limited edition screenprints generally sell out within minutes of being offered online—these guys are literally printing money. Whalen, whose work can be seen at strongstuff.net, is the son of the Pennsylvania coal country, a working stiff who still holds a day job as an editorial illustrator for a medical publisher.


On Saturday March 10, Mondo will release “Duck Dodgers in the 24 1/2th Century,” its first Looney Tunes print. In another first, the print will be part of Mondo’s debut exhibition in its new gallery space at 4115 Guadalupe Street in Austin. The theme is Science Fiction, and there will be almost 40 pieces of original art and screenprints from more than 30 artists, including Whalen's "Duck Dodgers." Hours for the opening are 6-10pm.


Naturally, Whalen was tapped to come up with the image, probably because he’s been creating cartoon posters for Mondo since February of 2011, when the company’s first Disney piece was released. That largely black, white and silver screenprint imagined a poster for the 1928 Disney short “Steamboat Willie.” Printed by DL Screenprinting in Seattle, “Steamboat Willie” was published in an edition of 200, plus a variant of 60 that swapped silver for sepia, among other minor changes. We hear the edition size of the seven-color “Duck Dodgers” will be 320, and the price will be $40. Good luck getting your hands on one. 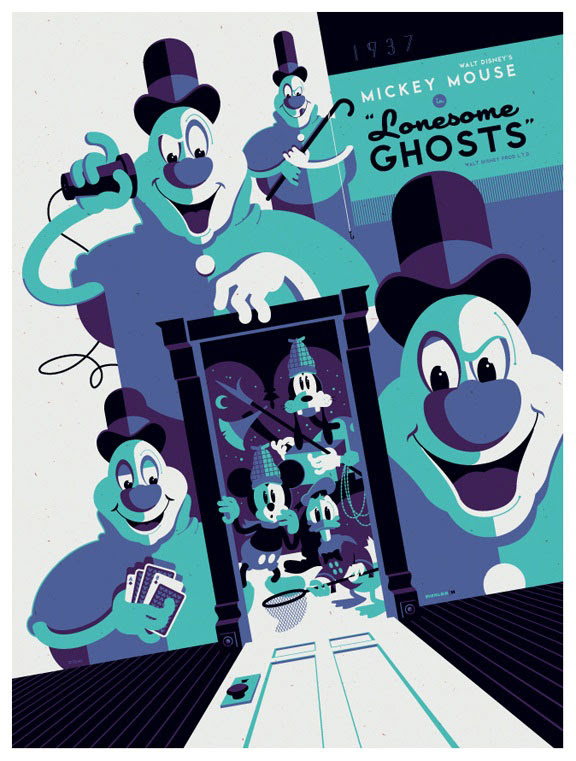 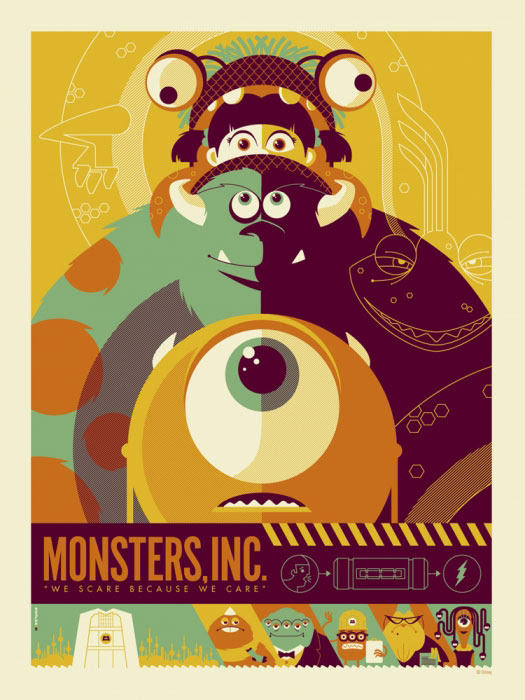 At first, Whalen’s night job as Mondo’s “cartoon guy” took him a bit by surprise. “I never saw myself as that,” he says, “but I’m fine with it. Since that first wave of Disney stuff came along, my style has adapted a bit to the cartoon realm.”


Like a lot of illustrators, Whalen started young. “I probably got interested in drawing and comic books in the sixth grade,” he says. “By the time I was a junior in high school, I was dragging my feet academically, but my mom pushed me to at least start thinking about where I wanted to end up. She knew I enjoyed drawing, so she said, ‘Why don’t you look into that as a career?’ Turned out there was a school called Kutztown University within an hour of my house. They had a fantastic illustration and design program, I applied, and luckily I made it.” 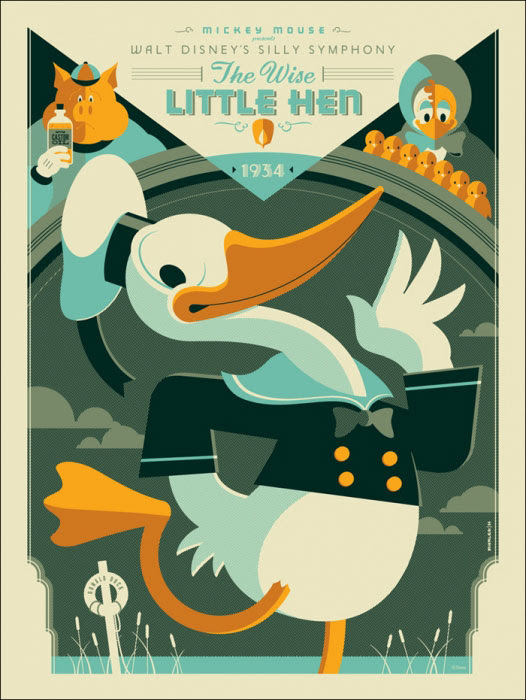 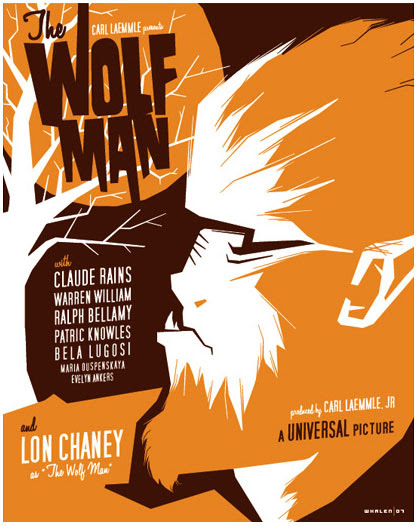 Now 37, Whalen was inspired by such comic-book artists as John Romita, Jr., Todd McFarlane, Jim Lee, Mike Mignola and Art Adams, “all those guys in the ’90s,” he says. “Not that they are reflected in my style, and I’ve never felt like I could pull off what they pull off, but they’re the ones who got me hooked on comics.”


After graduating from Kutztown, Whalen did what a lot of aspiring illustrators do—he created fan art, partly for the sheer love of the form, partly in the hopes that someone would notice. “As a result of that fan art floating around the Internet for six or seven years,” he says, “I starting getting calls from ad agencies and companies. That’s how I got one of my first big jobs with Global Knowledge. The guy who hired me is a comic-book fan. He saw my work on comic-book sites and said, ‘Hey, can you apply that aesthetic to our project?’ That was really the start.” 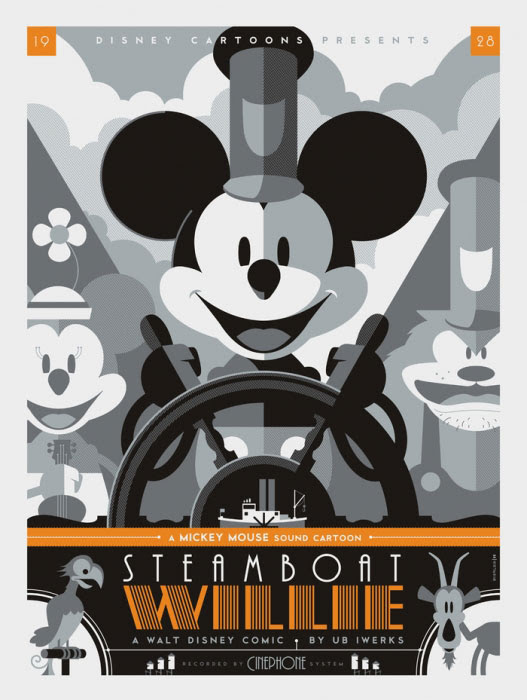 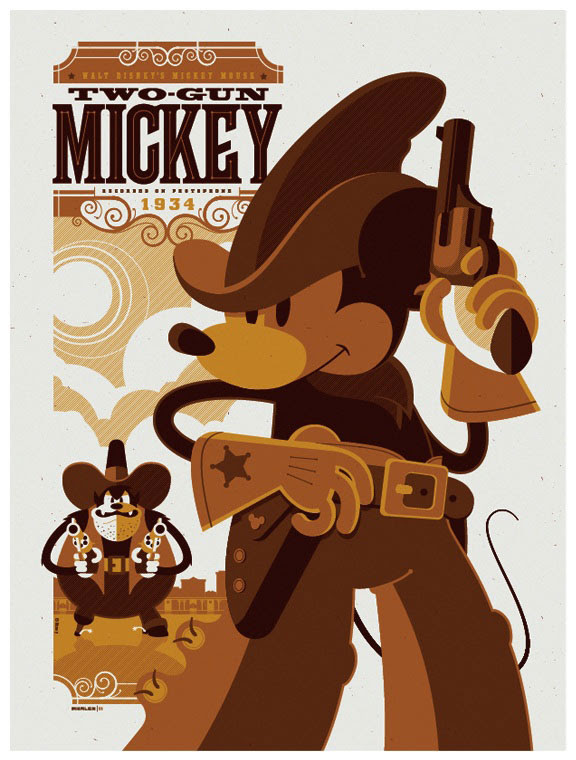 Whalen’s work for Global Knowledge resembled sensationalist genre movie posters, populated by men with chiseled jaws, women with impossibly long “Incredibles” legs and lots of hard edges (Whalen uses gradients sparingly). Examples of his fan art included faux movie posters for Universal horror classics such as “The Wolf Man” with Lon Chaney and “The Bride of Frankenstein” with Elsa Lanchester, as well as a collage-like ode to a more recent cult fave, “Shaun of the Dead.”


In retrospect, hooking up with Mondo seems almost inevitable. “I really admired what they were doing,” he says, “and then in the summer of 2010, they contacted me. I guess they saw the fan art, or maybe a piece at Gallery 1988 in Los Angeles. That led to ‘Palace’, the Jabba’s lair print for their Star Wars series.”


Mondo and Whalen quickly settled into a productive groove. “My first sketch always goes to Rob Jones,” Whalen says. “He’s the art director. We have many midnight calls because that’s when our schedules line up.


“There are three prongs to Mondo,” Whalen continues, “Rob, Justin Ishmael and Mitch Putnam. Everybody will kind of shoot emails back and forth and say, ‘Hey, it looks good,’ or ‘What about this?’ But if they toss an idea out and I’m not into it, they’ll just say, ‘You’re the artist.’ Conversely, Rob has a great eye for layout, composition and color. It’s really and truly collaborative.” 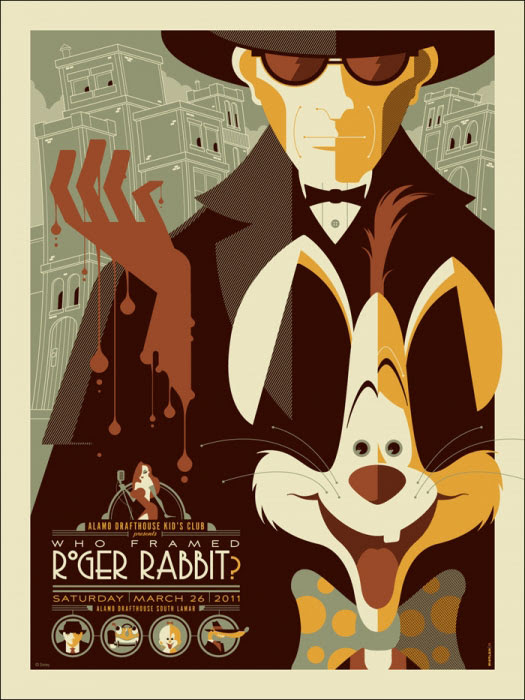 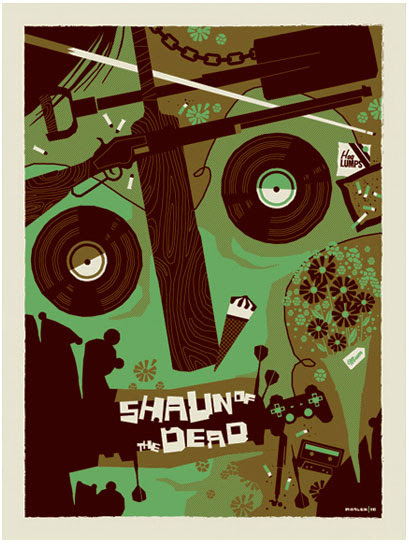 Once the design is approved by the studio, which licenses the cartoon’s creative assets to Mondo, the file goes to DL Screenprinting, which produces prints for Emek, Olly Moss and scores of other rock-poster and Mondo artists. “Everything I’ve done for Mondo has been printed up there,” Whalen says. “I love screenprinting. Flat color, the interaction of shapes and negative space are a huge part of my work. There have been many times when I’ve designed a piece, sent it off to get printed and then thought it looked better as a screenprint than it did on my computer screen. There’s something tactile about screenprinting that’s very appealing, the way the ink lays on the paper.” 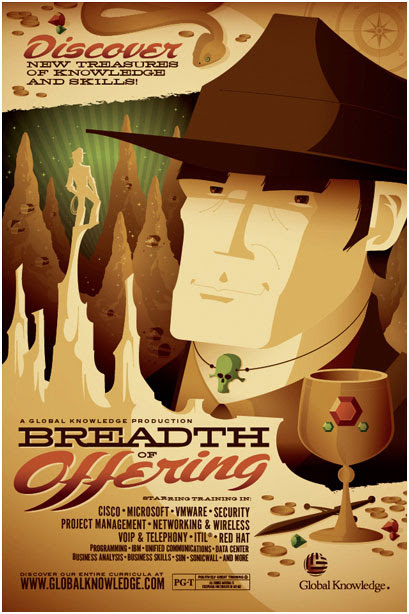 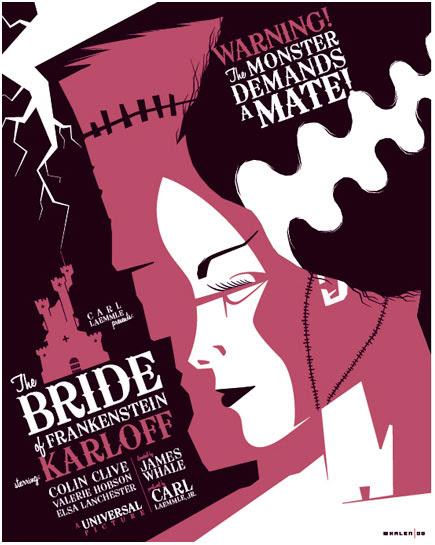 Having worked with Star Wars, Star Trek, Disney and Pixar imagery, Whalen is obviously pretty fortunate. He’s basically an artist who likes two-dimensional toys, and he’s gotten to play with some of the best. “I had actually been thinking about how lucky I’ve been,” he recalls of a day late last fall, “but Looney Tunes was still out there on my bucket list. And then literally within a few weeks of thinking about that, Rob called and said, ‘Let’s get going on Looney Tunes.’”


One of the pleasures, Whalen says, of doing posters for Mondo has been the excuse to reconnect with cartoons he hadn’t seen in a while. “The Disney stuff was great because I got to go back and watch films and shorts with my three-and-a-half-year-old son. I’ll watch a cartoon a few times in order to generate a rough pencil sketch. From there I’ll build up a color and composition study. Before I go into any detail on characters, I want to make sure the composition is strong, including the typography. That’s what I show to Mondo, to get their input and make sure it’s on the right track. Within a week or two of their suggestions, I deliver the final art.” 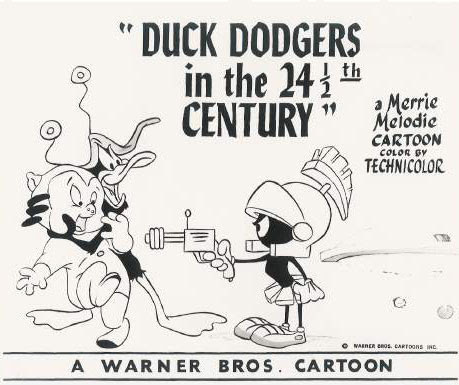 For “Duck Dodgers” Whalen deviated from the 1953 black-and-white lobby card, which placed Marvin the Martian front and center, to focus on Daffy Duck, who has been dispatched to Planet X to replenish the world’s supply of Illudium Phosdex, “the shaving cream atom.”


When “Duck Dodgers” was released, the United States and the Union of Soviet Socialist Republics were engaged in a bitter Cold War. So while the title is an obvious reference to “Buck Rogers in the 25th Century,” the Michael Maltese story, directed by Charles M. Jones, must also be viewed as a wry commentary on the futility of the super-power struggle. After all, it ends with Daffy claiming Planet X in the name of Earth, but only after he and Marvin have reduced the planet to a tuft of turf barely big enough for the duck’s orange webbed feet. Even Daffy’s sycophantic crew member, Porky Pig, is nonplussed by Daffy’s hollow victory. “B-b-big deal,” he stutters at the cartoon’s close.


The same might be said for a 2012 poster about a 1953 animated short, but for people who’ve been following Whalen’s work for the last year or so, the sentiment is completely sincere. 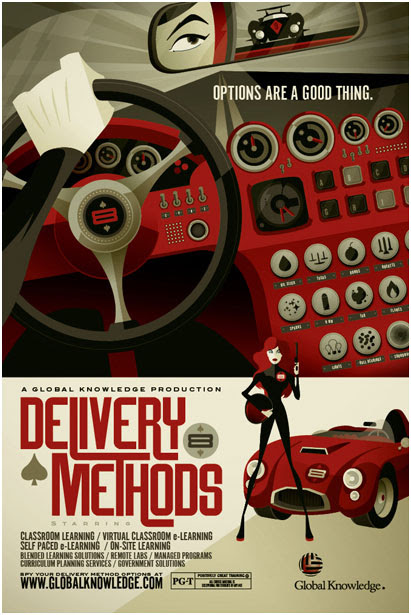 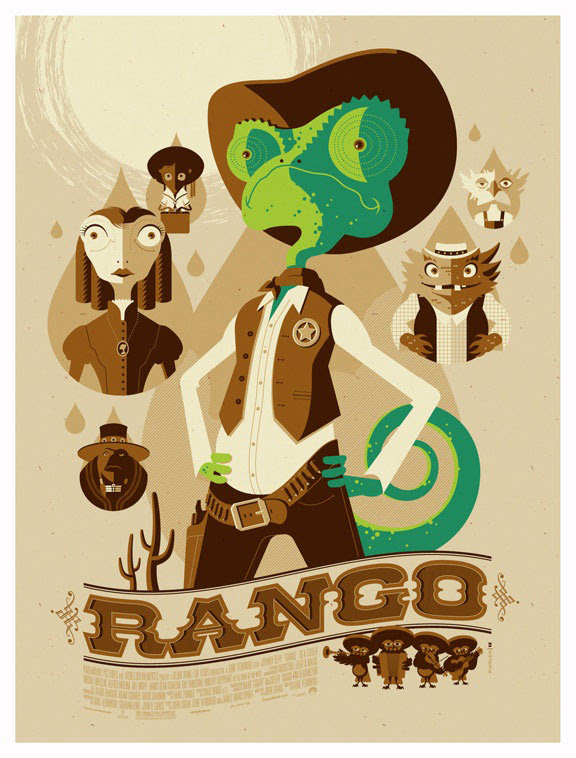 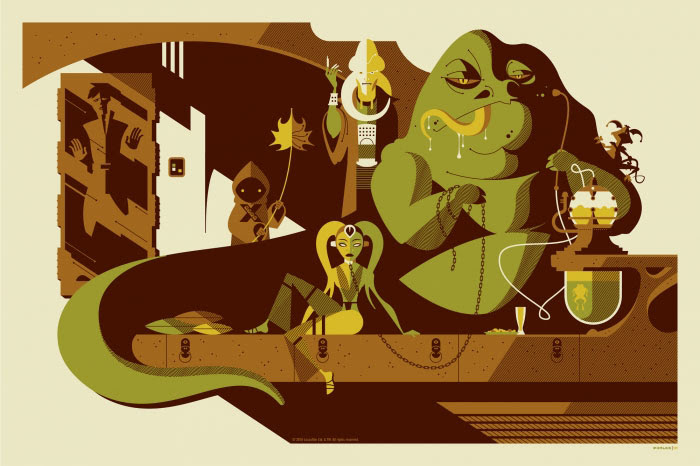