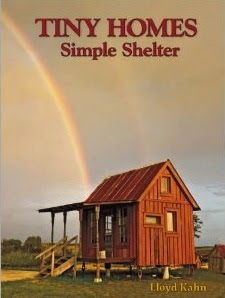 This book will convince you to build your own house. The key is to make it small. A really small house costs less, liberates time, and encourages you to spend that time making the details personal. Because everything is scaled down, the space is much more customized. The result is a home that grows out of your life.

Tiny houses are the norm for most people in the world, but have been out of fashion in the US for many decades. Recently some Americans are rediscovering the joys of very tiny homes for several reasons: hard economic times, a reaction against modern excess, and a realization that a digital world does not require a lot of space. There are now a handful of blogs and a whole shelfful of books about tiny homes. Mostly good stuff.

This new book is the best of those guides and eclipses the previously recommended The Tiny Book of Tiny Houses. Lloyd Kahn has built several of his own small homes, and has edited a number of great books celebrating owner-built shelters, including the previously reviewed Home Work. Here he focuses on tiny homes, which he defines as shelters 500 square feet or less. Some are on wheels, a few float, some are pre-fab, but most are handmade shelters placed in odd corners in cities, suburbs and the country. Their variety is stunning. This large book erupts with a cornucopia of 1,300 photos featuring 150 different tiny homes, showing you how they were built, giving resources and helpful tips of their construction, supplying design solutions and inspiration for others, but also conveying WHY they were built. Tiny though they are, they are much more than mere shelter.

What I love most about this book -- as a tool -- is the way it explodes the possibilities of what a tiny house can be, and how every page conveys the important message that the challenge in building such a tiny structure is not the material, which is almost trivial by definition, but the immaterial. A tiny home is a matter of gumption, resourcefulness and imagination. This book, like all Lloyd Kahn's work, cultivates those virtues.

You leave the book realizing, knowing for sure, that you, yes you, can build a tiny house. And should. The theme of our eco-resort has always been Adirondack Style, which translates to "built with time and no money." Each year we renew our contract with the state to harvest "dead and down trees." It's like building structures in the middle of Mother Nature's lumberyard.

[This 97 sq. ft. house] was originally a pump house built over a well in 1900. At some point in the '70s it was converted to a chicken coop. A couple of years ago I converted it to a stationary yacht. The design was inspired by living on a small sailboat in Alaska. It's superior to a sailboat in that it needs less maintenance, is unlikely to sink, has lots of windows, and is surrounded by a garden so you don't need to row ashore. It's inferior to a sailboat in that it can't sail anywhere. 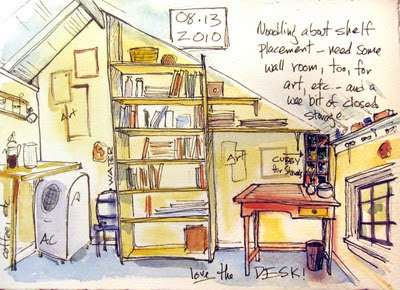 I did a quick sketch of what I needed. 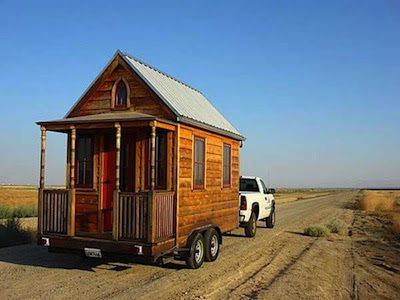 The key to designing my happy home was designing a happy life, and the key to that lay not so much in deciding what I needed but in recognizing all the things I could do without. 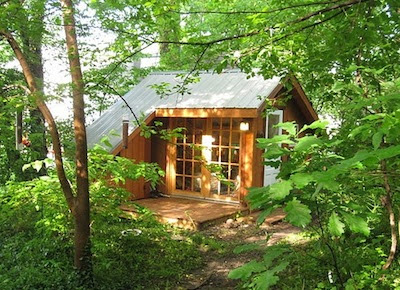 It is not a building. It's MY building. 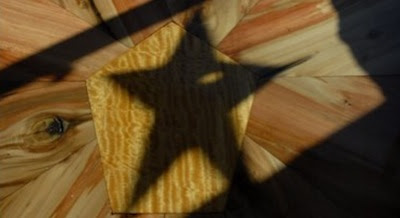 The pentagonal floor is made from lumber milled on site. At center is a pentagon. On Mike's birthday, October 29, a beam of light shines through a hole in a 5-pointed star in the door, and falls on the central pentagon!