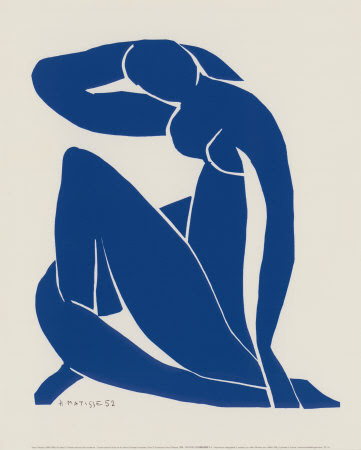 Painter, sculptor, printmaker, designer, draughtsman, and writer, Henri-Émile-Benoît Matisse was born on December 31, 1869 in Le Cateau-Cambrésis, France. Before studying art, Matisse worked as a solicitor’s clerk in Saint-Quentin and took a law degree from 1887 to 1889 in Paris.

Matisse studied drawing at the Ecole Quentin Latour and began painting in the winter of 1889 while recovering from appendicitis. He gave up law to study painting at the Académie Julian in 1891 under painter William-Adolphe Bouguereau and took drawing and perspective courses at the Ecole des Arts Décoratifs. Matisse joined the studio of Gustave Moreau in 1892 and passed the entrance examination of the Ecole des Beaux-Arts in 1895. In 1898 he married Amélie Parayre with whom he had two sons.

Matisse’s early works were essentially based on the study of the Old Masters “firmly based on reality, in a restricted tonal palette influenced above all by his copies after Dutch masters and Chardin and by exhibitions he had seen of the work of Jean Baptiste Camille Corot and Edouard Manet.”

Matisse exhibited at the Salon des Indépendants in 1901 and had his first solo show at the Galerie Vollard in 1904.

Matisse, along with André Derain and Maurice de Vlaminck became one of the principal figures of Fauvism, which has its base in Impressionism. “In reviving the study of the nude human figure, Matisse’s work was partially a reaction against what he perceived as Impressionism’s neglect of this traditional subject.”

Like other avant-garde artists in Paris at the time, Matisse was interested in influences beyond the realist tradition. Between 1904-05, he spent summers painting in the Mediterranean which resulted in his abandonment of the traditional Impressionist palette in favour of what would become his characteristic style of “flat, brilliant colour and fluid line”.

From 1906 – 1910, Matisse became increasingly successful and his art began to be exhibited and published outside of France. Writer and art collector Gertrude Stein, as well as art collectors Etta and Claribel Cone, began acquiring Matisse’s work. During this time, he was also introduced to Picasso with whom he would have an “intermittent rivalry”.

“Matisse’s work during this period falls into three categories: figure compositions, still-lifes and interiors, and portraits. He moved away from the Fauve style and experimented with a new language of the human figure stimulated primarily by Gauguin’s primitivism, but also by Cézanne’s compositions of bathers, by classical decorations, by African tribal sculpture and by the challenge of Picasso.” (MoMA)

Between 1010-1917, Matisse created what many critics say are the best works of his career. Inspired by his travels to Spain, Russia, Morocco, his further response to Cubism was to create larger, more exotic and colourful paintings.

In 1918, Matisse relocated to Nice, France where creatively he focused on the female form, landscapes, interiors, still-lifes of flowers, and light itself. During this period, he maintained a habit of working outdoors but this production did not result in major works. In 1925, Matisse traveled to Italy and Sicily after which he painted fewer canvases and seemingly gave himself the “task of resolving in drawings, sculptures, prints and paintings the articulation and balance of mass of the seated and reclining female nude.”

Matisse virtually gave up painting in 1929 to focus on a series of over 200 etchings, drypoints and lithographs. “Drawing was essential to Matisse’s paintings of the later 1930s, as was an expressive distortion of the female form in order to capture the mood or personality of the model, for example by exaggerating the length of her body in languid repose.”

In 1928, Matisse moved to Cimiez, a suburb above Nice. In 1941, surgery for a tumor left him disabled and unable to travel. This led to his grand interior paintings between 1946 and 1948, the decoration of the Chapelle du Rosaire at Vence from 1948 to 1951, and to his final works – a series of paper cut-outs.

Matisse died of a heart attack on November 3, 1954 at the age of eighty-four. He is buried at the cemetery of the Monastère Notre Dame de Cimiez, near Nice.

For an in depth biography, visit the MoMA website. 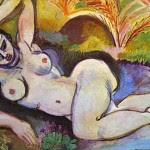 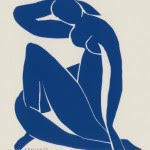 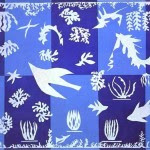 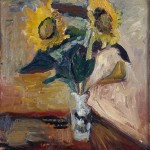 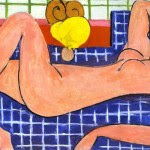 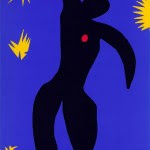 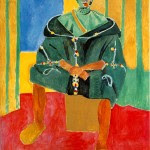 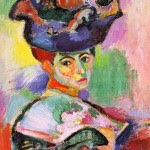 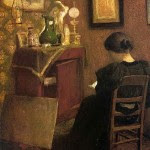 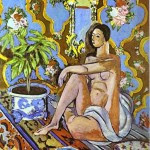 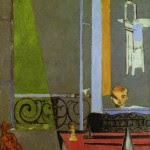 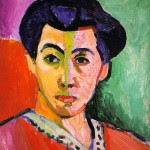 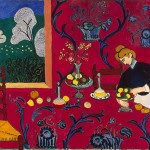 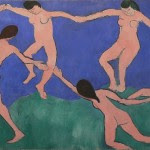 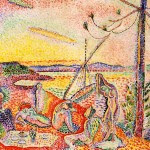